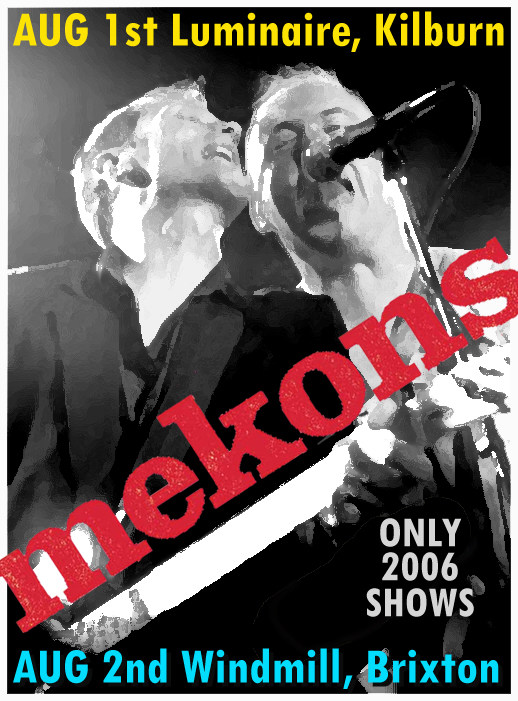 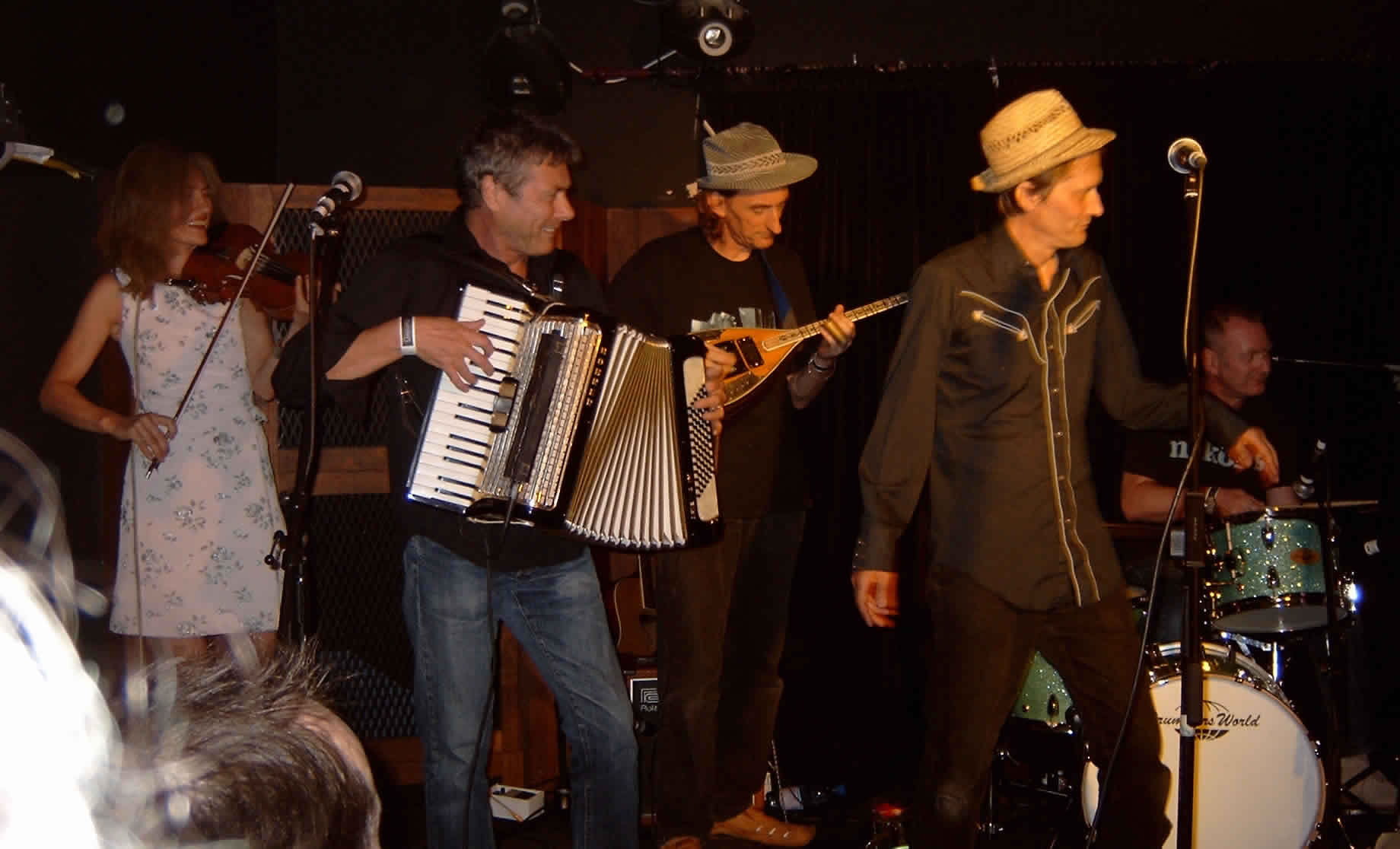 The Luminaire show started great with some typical Sally and Jon debates but slowed down after 20 minutes. So it became what it was meant to be: the long overdue next lest gig by the Mekons. (The threat being not so heavy, cause the next last gig was just one day ahead). Some songs sounded as if they lacked practice and some didn't.

The setlist was good, the show all in all a bit short, so we were satisfied but could still hope for the next day.. 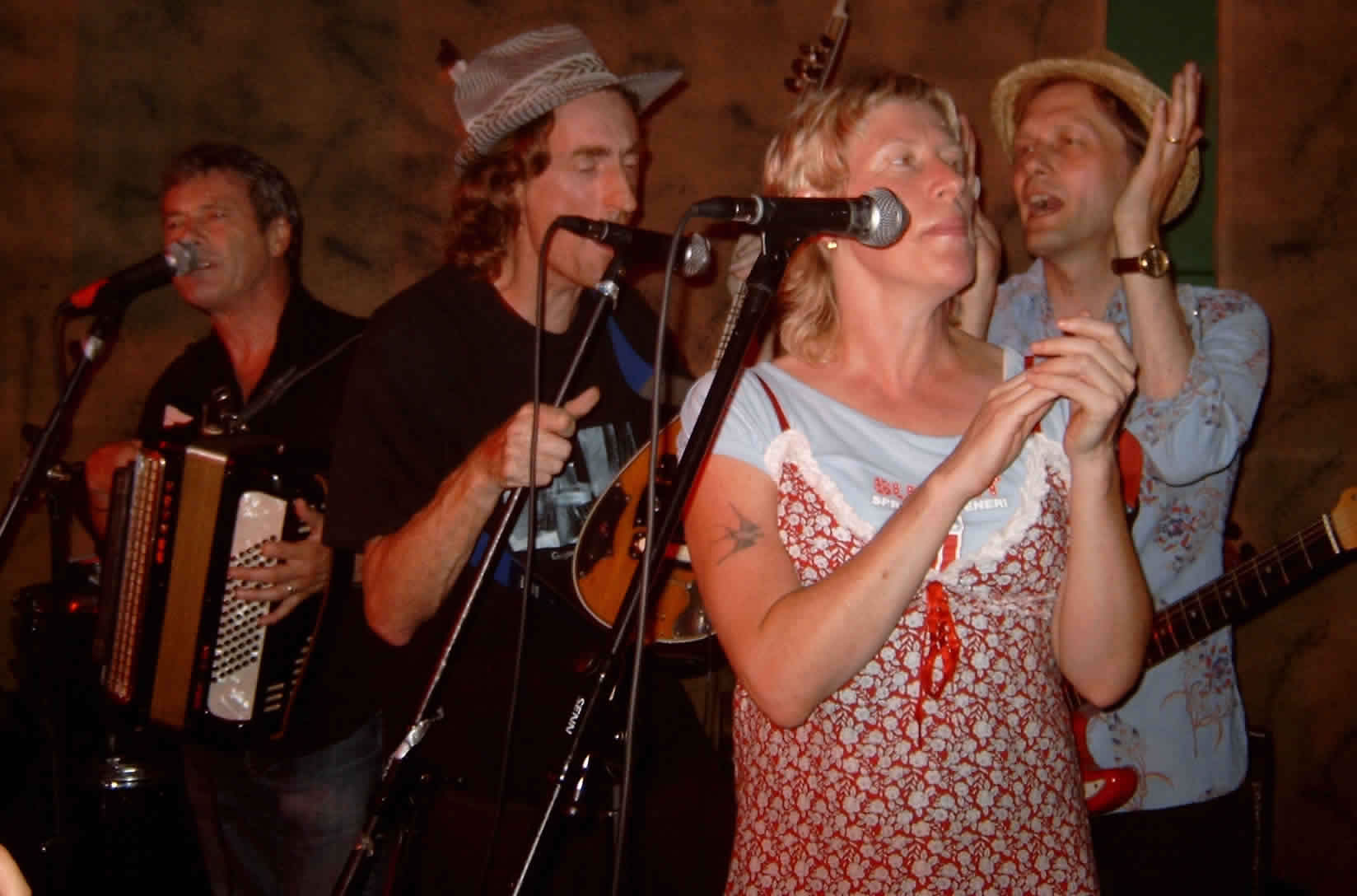 Fuck The Kaiser Chiefs. Fuck Duels, and The Mission and Alan Clarke, Eddie Gray, Waltzing Masinga, Tony Yeboah and even fuck (god, how I'd love to!) Eric Cantona. The best thing ever, ever, ever to come out of Leeds is The Mekons. Go on, I dare you to disagree.

Turning up at a Mekons gig can be a hit-and-miss experience. There was one time, about five years ago, when I stood at the centre of a virtually empty dance floor in The Borderline while The Mekons asked, somewhat forlornly, if there was anyone in the audience who'd actually paid for a ticket. Three people put their hands up - me, the better half and our pal Gerard, all of whom are back for more tonight. Wind on a year, and they played the 12 Bar Club with an audience barely pushing double figures. And yet they're one of the best bands in the world. They invented alt.country (or the bits of it that Gram Parsons didn't, anyway), taught Arcade Fire everything they think they know, perfected pop-punk and blow away every audience they ever play to. And yet despite all this, they're one of those bands that musos and journalists love but virtually no-one else has ever heard of. They should be huge but they're not, reconvening tonight from three continents to play this tiny back room of a Brixton pub.

This is the second of only two UK gigs this year; the other took place last night at the Luminaire in Kilburn, beloved of Club OMH and name warm-ups but barely big enough to swing a cat. Tonight's venue, The Windmill is even smaller, with a horseshoe-shaped bar that hides the stage away in a corner as if acknowledging that no more than five people ever want to pay attention to the band. But tonight is different. Tonight is family and friends and friends-of-friends of the band and journos in the know night, and the place is heaving. Arrive early enough and you can fraternise with The Mekons' children, watch a dog on the roof stare down other dogs and get let in before your mate with the 'untoutable' e-ticket arrives, if you sweet-talk the girl on the door, then stake your claim to one of the wooden benches against the wall from where you can, just about, actually see the stage if you stand on one leg and stare really hard over the heads of a crowd that includes ex-QPR footballer Rodney Marsh.

It's all worth it of course because, as you'll have noticed if you're paying attention (to music history, as well as to earlier in this review), The Mekons are the Best Band in the World. Tonight there are eight of them, dwarfing the tiny stage with violins, accordions and long sitar/lute stringed things as well as standard rock'n'roll geetars. Sally Timms is in good form and she and Jon Langford make cheery small-talk with the intimate audience between crowd favourites that include Millionaire and Memphis, Egypt, finishing as ever on Where Were You, sung by roadie Rico Bell. It's a fantastic, fantastic night.

Not only are the Mekons always this good but they have been this good for 30 years. 30 years! Longer than most of you reading this have been born (something not true of last night's audience, it has to be said...). They've made concept albums with Kathy Acker, recorded Millionaire - one of the most storming pop songs ever written, Memphis, Egypt - the best rock'n'roll shout-along ever written (Destroy your safe and happy life before it is too late!) and the one about the lights going out all over Europe whose title I can't remember - the best indie rock ballad ever written but sadly not on show tonight. Neither was Empire of the Senseless, another one of indie rock's greatest songs. Because they have lots of other ones that are just as good that they can play instead.

So why are they not the biggest band in the world? I'll let you in on a secret: it's all a huge indie journo conspiracy. If they were as famous, as interstellar as they deserve to be, they'd never play tiny venues like The Windmill ever again and if that happened, we'd lose the chance to sneer at what a great time we had while the rest of the world was listening to Snow Patrol on Radio 2. And so somehow, we keep them to ourselves, in the cramped back rooms of Brixton pubs and only tell you about them after it's too late. There really is no other logical explanation.

(Remark: Rico plays accordion and Where were you (as well as the Satan chant) were sung by roadie Mitch.)

We were waiting at the bar, where was Boocock?
We were moshing to the Mekons, where was Boocock?
We were rushed to A&E, where was Boocock?
Two nights of glory for the Mekons, two nights of shame and degradation for the Mekonistas (those few who survived the Bacchanal).
Jon and Sara had both been on crash diets and were in peak fighting condition, Sally wore virginal white in Kilburn (or was it her wedding dress?), Tom looked sleazier than ever in his peasant's straw hat, Suzie and Lu laughed and fiddled, Mitch was satanic and Rico finally sang, to some effect.
Outstanding fun...and what's this rumour that they spent 5 days rehearsing and recording new material. Should we expect a new album circa 2010?
I'm sure someone will eventually sober up enough to post a set list to remind us what we missed.

The Mekons were sublime. The Brixton gig in particular was one of the best I've seen them do.

The Windmill mosh pit of 45-year-old men with either (a) grey hair, (b) bald heads or (c) both constituted the ridiculous. I only hope someone was filming that audience. It'd be priceless blackmail material if the Mekonistas had any (a) money, (b) pride, or (c) both. I haven't laughed so much since, well, since we heard details of Rico's unsuccessful pre-Beatles releases.

My lasting memory is Jim with 4 or 5 pints in his hands and a bottle in his mouth attempting to get through a frenzied mob. Tremendous gig -
great to here Prince of Darkness and even better when Tom forgot the words. And when they launched in to Rock and Roll - well the less agile audience retreated a step or two

No comparison to the Luminaire: While on the day before the band seemed a bit hesitant to let it all loose, this was one of their finest gigs ever. Strange enough anticipation was quite high and got even higher before the show began. The place was absolutely packed the air was as thin as could be, the stage was half the size than the day before and once the band had entered you had the feeling they couldn't get back.

Great and lots of fiddling by Susie, banter throughout the night between Jon and Sally, Tom was much more engaged than at the Luminaire, Rico sang Sweet Dreams, Lu threw in lots of hard rocking on his oud, barefeet Sarah kept the beat when Steve lost it. Actually he didn't loose it but was claimed guilty for a false start on Dan Dare. After Dan Dare you could hear Sally: Bloody hell, we should have practiced.