Mekons go out of their heads

A bunch of British art-school students started a band called the Mekons in 1977, with the idea that they didn’t know how to play their instruments and didn’t really need to. 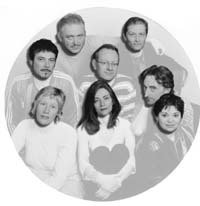 After all, they didn’t plan to make any records — or do anything other than make a lot of noise.

After landing a record deal at their first “shambolic” gig, the Mekons embarked on a weird musical odyssey, including encounters with spitting concertgoers and uncomprehending record-company executives, stabs at Hank Williams-style country music, collaborative art shows and 20 albums’ worth of the best rock music you've probably never heard.

Somewhere along the way, they did learn how to play their instruments, and a couple of the Mekons ended up living in Chicago.

Celebrating their 25th anniversary — as well as the release of one of their strongest albums yet, a new art exhibit and a book of collected lyrics — the Mekons will play a series of four area shows this month, including a stop at FitzGerald’s in Berwyn.

The story of how the Mekons developed their new album, “OOOH! (Out of Our Heads),” may be unique in the annals of rock history. The album started out as an art exhibit last year in Britain.

“It’s ... all those myths about these sort of singing heads, heads that could be cut off but somehow are still alive,” said singer-guitarist Jon Langford, a Mekon who lives in Chicago and plays in several other bands, including the Waco Brothers. “You chop the head off and ... you get in touch with the animal inside you or something. It’s all pretty crazy stuff.”

A rampaging group of hooligans — “We prefer to refer to them as art critics,” Langford says — broke into a Manchester gallery where the Mekons art show was on display and smashed most of it to bits. One of the Mekons videotaped the aftermath, turning this act of destruction into another work of art.

In the meantime, the Mekons were transforming the ideas behind the art show into an album filled with the band’s distinctive unison singing featuring four or more vocalists at a time.

In addition to beheadings, the Mekons were also thinking about William Blake and various radical religious sects that popped up in England centuries ago, including the Muggletonians.

These interests aren’t typical subject matter for rock lyrics, but the Mekons have never shied away from exploring intellectual concepts, although they do it in a way that usually seems fun rather than heavy.

“Anglo-Saxon culture has a deep phobia of anything that whiffs of intellectualism,” said singer-guitarist Tom Greenhalgh, who lives in England. “It should be possible to think about deep things without having to take yourself too seriously.”

“I don’t see why history or intelligent thought is something that should be reviled,” Langford said. “I really hate that anti-intellectualism that is so prevalent everywhere. It’s almost like it’s uncool to have a serious thought about anything.”

“It’s about reclaiming — rediscovering — a tradition of radical dissent, about trying to know your own history,” Greenhalgh said. “Things haven’t always been the way we’re led to believe.”

Singer Sally Timms, who lives in Chicago, said the CD’s opening track, “Thee Olde Trip to Jerusalem,” was an attempt at creating the sound of a choir from one of those religious sects.

“We kind of wanted it to sound like you had just wandered by a tiny chapel and heard a load of people in there singing,” Timms said. “And you were standing at the doorway, going, ‘What the (expletive) are they singing about?’ ... You had just stumbled across some bizarre sect of people, who were just singing away to their heart’s content, to themselves.”

A bizarre sect of people singing to their heart’s content is an apt description of the Mekons themselves. Langford said the Mekons have made some of their best music when they didn’t think anyone was paying attention.

“It was kind of a good way to make music, when you really do think no one is listening,” he said. “Kind of liberating. You can just do whatever you want. We were just having fun making music, you know?”

The Mekons are known for their sometimes raucous live shows, with a lot of humorous banter and antics to complement the music. They plan to continue playing as long as they can.

“Why stop?” Timms said. “It takes more effort to stop than to keep going at this point.”

She said it’s all but impossible to quit the Mekons.

“People have left and then they come back,” she said. “You see the look in their faces, that we’re dragging them through this horrible ... existence. They leave for a while, and then they realize they can’t help themselves, so back they come.”