The problem with the Mekons is that there's so damn many of them.  Once described by American art critic, Greil Marcus as "a free floating aggregation of anarchists, students and provocateurs", the band can boast well over sixty part-time or one-time members, circled around a hardcore of five or six, and a family tree that stretches right through from those grand old men of rock and roll, The Rolling Stones, to psycho-Balkan popsters the 3 Mustaphas 3.  The whole thing is so confusing and yet awesome all at once.

Coming from the same University Of Leeds political swamp that produced The Gang of Four, the band's debut album The Quality of Mercy Is Not Strnen (monkey typing out Shakespeare on the cover) took punk minimalism to an extreme.  Amateurism was the order of the day.  It didn't matter that the line up was different every night or that no-one could play more than three chords.  Those who couldn't play tried to learn and those could tried to forget.

With a current discography of over twenty releases, the Mekons's sound perhaps surprisingly, metamorphosed toward English country music with the 1983 single, The English Dancing Master.  Founder member Tom Greenhalgh described his first encounter with the English tradition:  "I got that English country music album with the black cover [Topic 12T296].  I remember when I first heard it I just couldn't understand what was happening.  It was just incomprehensible.  I just thought, I can't handle this.  I deliberately sat down and listened to it ten times until I could understand it.  It was real culture shock.  It sounded out of tune, out of time, you name it.  It was awful.  But then after a while I gradually understood it."

Central to this predictably awkward change of direction is the band's long-standing relationship with sound engineer Jon Gill (Gill and Greenhalgh are also members of Edward II & The Red Hot Polkas).  Also a founder Mekon, Kevin Lycett explains, "We'd recorded the album for Virgin [The Quailty of Mercy] at The Manor, which was this totally over-the-top country house owned by Richard Branson.  It was like two weeks holiday with a swimming pool, go-carts, food served on the table every night and a wine cellar.  We were a bit unhappy with that -- the album turned out really badly.  So we thought we'd go to the other extreme and find a cheap local studio.  We'd used one in Leeds and it was awful, so we found this one on the hills just outside Halifax, which happened to be Leader Sound, owned by Bill Leader.  Engineer for the session was John Gill.  We didn't know who John Gill was, he was just this very thin, very enthusiastic person.  We were writing the album as we recorded it and because it was different people working on the tracks John was the only constant factor.  He just became more involved.

"Then it turned out that John had this bizarre foot in both camps.  He had been at Riverside Studios in London when the Pistols were doing their first recordings and the Banshees also did their first there.  So he knew all that area.  But later we found out he was very involved in traditional music.  There was a conversation at some point where he said, 'Basically, you're an English folk band'.  We said, 'What are you talking about?'  We had no idea -- folk meant beards and Fair Isle jumpers."

Kevin continues, "We couldn't understand what he was going on about and then he explained that it was to do with the attitude to how we worked and told us about Walter and Daisy Bulwer.  So we started listening to things like that."  Tom continues the story.  "John was talking about this thing where the ineptitude of the playing becomes stylised and eventually becomes part of the music."  Something which the Mekons had been doing since the early punk days.  Back to Kevin; "There was a different order of needs for playing.  It didn't start with musicianship, it started from a need to play.  Country dance bands came together because there was a dance and you needed music.  The music was provided.  In the end it might work well or not, but its function was to provided music for dancing, not music for its own sake."

Ever eclectic, the band has more recently found a second downwardly mobile platform in the lovelorn hangover of American country music.  The last two albums, Fear And Whisky and the more recent Edge Of The World, have shown a definite country feel.  Inept and rough as barbed wire, their savage reworking of Hank Williams's Lost Highway has to be heard to be believed.  The bastardised country songs lean just as heavily on Eric Bellis's accordeon and Susie Honeyman's fiddle as Jon Langford's chainsaw guitar.

It is this this eclecticism, I think, that has kept the band alive.  The present line-up certainly shows a varied interest.  As well as Susie and founding members Tom, Kevin and Jon, the band includes Steve Goulding who has just returned from a US tour with the Thompson Twins, Lu from the Mustaphas, and Dick Taylor who once played with a little-known band which later became known as the Rolling Stones (and was also in The Pretty Things)!  Even after ten years, the Mekons' philosophy is loose enough to allow the bands to simultaneously play a gig in Newcastle and record an album in Leeds.  As I said, there's too damn many of them.

With their shambolic stage presence, the band are often taken as superficial and humorous.  Kevin counters this by saying, "I can't think of anything more serious that I do.  I suppose it's playing expensive ball games from America with the Mekons."  It is this American angle that adds the Mekons story its engaging quality. 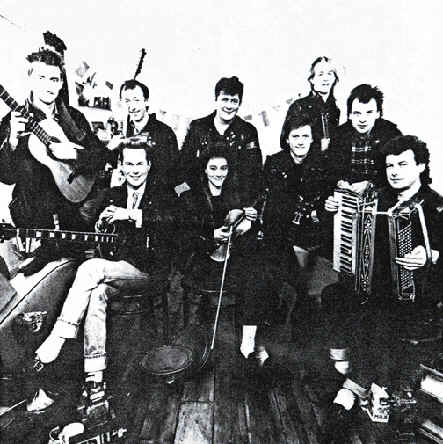 The Mekons involvement with America started back in 1980/1.  "We played a New Year in America.  Us, the Gang of Four and the Au Pairs were flown over to New York to do this one date and then back again.  Some time during those three days, I think it was Jon and Andy met Lester Bangs", explains Kevin.  Tom continues, "They went along to this party where they were introduced as the Mekons and Lester Bangs said 'Why do you play this dog shit music?', to which they replied, 'I dunno, it's crap isn't it?'."  Impressed by this attitude, the critic, renowned for his speed-frenzied rock journalism, was persuaded to write something about the band.

As already mentioned, art critic Greil Marcus is a long-term fan of the band.  Writing for Art Forum and other highbrow journals, Marcus has produced several long-winded and somewhat fanciful pieces on the band, which only help to build the American Mekon myth.  Describing the Mekons as an essential part of the nihilist punk manifesto of the late '70s, he hears the present Mekons sound as a phenomenon of "the exile persistence of a punk dream and the transformation of life".  An influential and persuasive writer, Marcus has lent the Mekons' shambolic belief in expression without obligation an intellectual significance.

In a recent Art Forum piece, Griel Marcus uses the similarities between the Mekons' relish for cowboy imagery and André Bertrand's 1966 Strasbourg comic strip Le Retour De La Colonne Durutti to suggest that the band are part of a continuing situationist fascination with the cowboy philosopher.  Situationism, the work of a small avant garde group, The Situationist International (Western Europe, the UK, and later the USA, 1957-72), had as its core a belief in an attempt to manifest an aesthetic and social critique that would lead to a truly modern revolution, a mass refusal of boredom and alienation, that would replace art and commodity production, work and leisure, with the creation of situations (the latter defined as moments of life concretely and deliberately constructed by the collective organisation of unitary ambience).  Heavy stuff.

Despite having studied under Art History Professor T.J. Clark, himself formerly a member of the S.I., the band deny any such links.  "When we were at college there was a group of people who thought they were situationists", says Kevin, "but we had no sympathy with them at all".  Obviously aware of situationist tracts such as The Revolution of Everyday Life, Tom admits that any influence is "only in the direct sense that it has been an influence on everybody -- seeping through from the Pistols thing".  Indeed, the Sex Pistols' manager was himself a former member of the S.I. and it has been suggested that the whole thing was an S.I.-influenced project.  Obviously a tricky question, Kevin cleverly wraps it up, describing the whole subject of situationism as a parallel rather than any sort of direct influence.

Central to the Mekons myth is American lady, Sophie Bourbon.  Rather unflatteringly pictured on the last two LPs, Sophie is a fairy godmother to the band.  Kevin begins the story, "Sophie saved us at a very low point.  I was in America with the Lorries [Leeds Goth band Red Lorry Yellow Lorry] doing the engineering for them.  I was in Chicago and this young lass was at the gig who was very interested in the Mekons.  It turned out that Sophie Bourbon was her mother.

"I met her mother and I was telling her about the Mekons, we just chatted and that was it."  Tom and Jon were in Chicago a while later working with Jon's other band The Three Johns.  Sophie had by now heard some demo tapes which the band had sent over to college radio DJ Terry Nelson.  "Things were pretty grim at the time.  We had no money.  We were thinking about starting the label up, but we just didn't have anything at all."

Recording for a number of mainly punk labels, including Fast, Red Rhino and CNT, the Mekons now own and run their own label, Sin Records.  The logo, a parody of the Sun label which in 1954 released Elvis Presley's first record, is a real beauty.  Feeding of experience gained through their brief stay with major label Virgin, this would seem the logical next step.  Kevin continues the story; "We spent a year recording stuff, making demos.  We actually recorded at Topic for quite a while, working with John Gill.  There was something like twenty people working on the album, including the great Dutch band, The Ex.  Sophie put up the money for the album.  Not a lot -- it was about $500, which was just what we needed at the time."

The mysterious Sophie has since become ambassador, financier and inspiration to the band.  Her publicity sheets and sleeve notes are written with the frenzied energy and poetic sweep only matched by the band themselves.  Anyone who has ever seen the group, resplendent in stetson hats, ill-fitting Mexican jackets and cowboy boots, playing a music that successfully blends the subtle anarchy of English country music with the gruff howl of a deep Southern drawl can only agree with these last few lines from her fiery pen:

"Sin-sational, hell it's 1986 and faceless pomp/pop only sticks in my throat.  What have these dismal chart fops got to be so cap tooth cheerful about anyway?  Here's a group who've laughed more laughs, cried more tears and writ more tunes than you could shake a stick at.  The sinnin' and prayin' Mekons".  As Saturday night falls into Sunday morning we reach for another bottle.